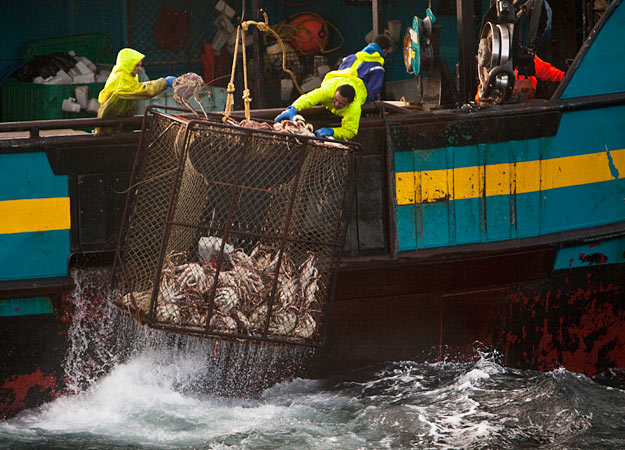 Photo Copyright Discovery Channel.ca
So there is a lot of excitement here in our house today! It’s because Discovery’s Deadliest Catch starts back up tonight! David and I watch 4 shows that we just love, Deadliest Catch, Formula 1 (although I’m not sure why), Grey’s Anatomy (which David doesn’t understand), and Big Bang theory.

Now here’s the thing. Formula 1 is International car racing. David has been a big fan since his teens when he was a bit of a speedster himself (shhhhh don’t tell his mom). In order for me to get interested he came up with a game (if you know anything about David, if it involves a game he’s in) every year we pick a team and subsequently a guy that we are going to cheer for. My guy is Jenson Button of the McLaren-Mercedes team and has been since I started watching. David’s team is Ferrari. (he prefers to cheer for a team b/c then he has double the chances of winning). Now if you don’t know anything about F1, please let me enlighten you, First you have to watch the qualifying which is done in three heats, Q1 everyone races and only the top 17 advance to Q2, Q2 only the top 10 advance to Q3, Q3 determines the racing starting position for the race the next day.  The standings are based on points, the more times you win the higher the points. Now the exciting thing about this year is David’s team is sucking (well they are in third)… and my team is Kicking butt and taking names (well maybe not taking names b/c they are only in 2nd). And so this past Sunday that’s what we did watched the Chinese Grand Prix, Next up Turkey!

Now my favorite show is Grey’s Anatomy, and yes it’s basically a Prime Time Drama in a hospital…there’s love, and blood, there’s girl drama…and illness..I mean who wouldn’t love this show? David that’s who, he can’t stand all the blood, guts and gross stuff! But how can you not fall in love with characters like McDreamy? or McSteamy. I would go into all the details of the drama on the show but that would be my whole blog, your better just to watch it. Anyway on Thursday’s it is my one self indulgences, curl up with a nice cup of tea… send David upstairs to work and enjoy 1 hour all to myself!

Big Bang Theory is one of those shows that it doesn’t matter if it’s a brand new show or from the beginning, it’s funny. It’s basically about these 2 guys (Sheldon Cooper, Leonard Hofstadter), with 2 geeky friends (Rajesh Koothrappali, Howard Wolowitz), and a “normal” girl (Penny) who lives across the hall. It’s about them living in life…kind of like a geeky, quirky version of Friends. Sheldon’s got some OCD issues, Leonard has a crush on penny, Raj can’t talk to women, and Howard thinks he’s a Ladies Man. It’s a great show… I highly recommend it!

For the Show we have been waiting for Deadliest Catch! This show is a reality TV show about a bunch of Alaska King Crab fishermen. It’s kind of like America’s Next Top Model but for boys, you would be surprised how much drama there can be when you stick 10 guys on a boat for a month. This show has bad weather, bad attitudes, and bad crabbing. About a year ago the show took a year off to grieve one of the captains (Captain Phil Harrison of the Cornelia Marie) who passed away at the end of the season. And yes we cried…probably blubbered for the full hour, even when we watched the re-cap last night. And so after not having Deadliest Catch in our lives for the past year we are greatly looking forward to tonight when it starts up again. There are three new captains and their crews to get to know and lots of tasty crab to catch. And so tonight at 10pm on the discovery channel Deadliest Catch sets sail again…and in this house we are excited!!!

David & Sherry's Ever After Shoot

Top 50 photos of the Decade and the Stories Behind Them