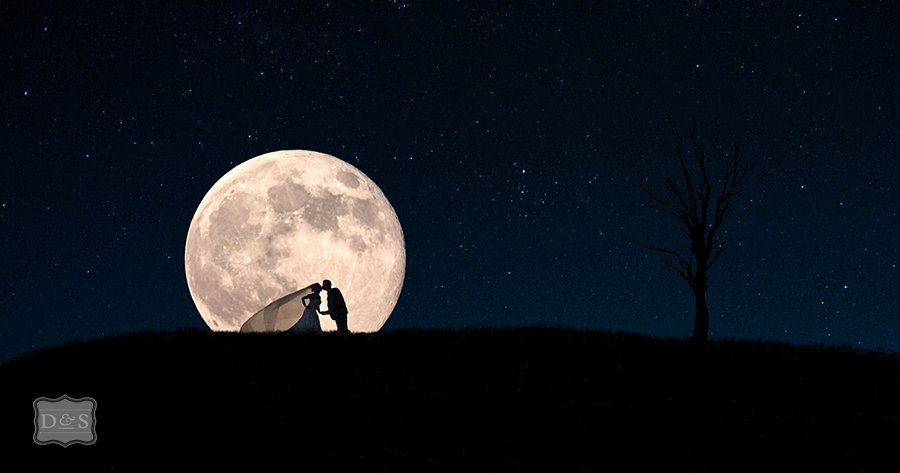 We love taking pictures!… I think that’s obvious, but we really do enjoy what we do.  So when ideas come along that are new and challenging, and can help make us better at what we love to do we jump all over those opportunities.
It all started a couple years ago when I had an idea for a photo.  I knew it was going to be a large undertaking with a whole bunch of planning, but what I didn’t know is how much fun it was going to be and how I would afterwards want to do something like this every year.

The idea was simple.  June 23rd of 2013 there was going to rise the largest full moon of the year, called a Super Moon.  We wanted to get a bride and groom silhouetted against that moon.   As you can see from the photo above, it was successful, but it took months in planning.  Here’s how it came to pass.

First thing I had to do was to learn about the moon, when it rose, how quickly it moved, and what to use to predict it’s rising location.  Did you know that the moon moves the width of itself every 4 minutes!!  Which means we only had about 2 minutes of useable moon time, and that’s not a whole lot of time to capture a shot :).  It turns out we had 4 possible days to make it work.  The 23rd, and the three days following, the moon would be in a location and rising at such a time as to use it, so we planned for people to come join us on each of the 4 days, two couples each coming two days.  We did this to help with potential weather, which is the one thing we couldn’t control.

Scouting for the location was the most difficult part, as the shot requires 600-1000 yards of clear space between the camera and the couple shot at an upward angle to a hilltop that has no trees or buildings behind it so that it backs onto the sky, at the right angle that the moon will be rising on that particular day.  After months of looking, we found a spot only 15 minutes from our home 🙂 Bonus!!  Some of the scouting was done using Google Earth, then I would drive out to the spots to check to see if they would be right.  We found a spot that would work beautifully, then went and met the people who own the property to ask permission which they were more than happy to give.

Below is the Google Earth view of the location we chose. 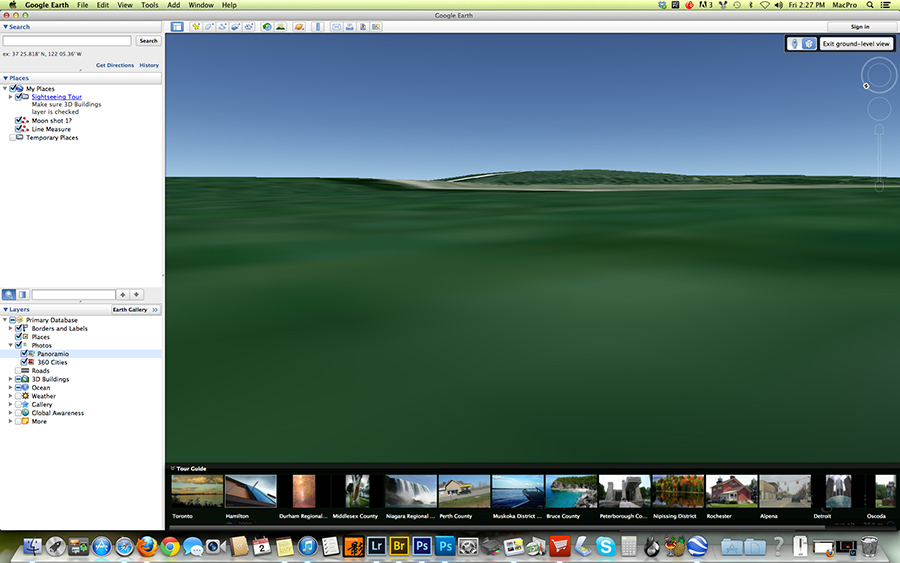 Of course, shooting a bride and groom silhouetted on the Super Moon requires more than just a good location, it requires a lot of distance and a really big lens.  We shot this with a 1200mm lens which is 20 pounds by itself and a beast to walk with across a field.  For you technical people out there, it was shot with a:

Below is a photo of the actual location shot with a 24mm lens.  Those two little dots on top of the hill in between the trees are our bride and groom. 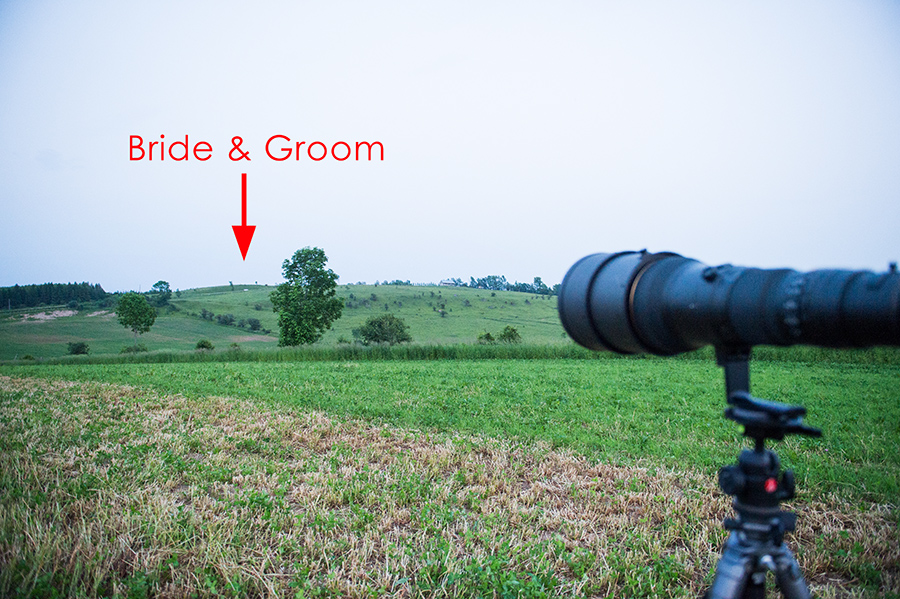 Here’s a couple shots from Andrea & Des from the day :).

The day of, we did an engagement session with Des & Andrea at Casa Loma, then we came up to our location after dinner and waited until the sun went down.  We had to put them on top of two three step, step ladders which we had bought from Canadian Tire the day before so that they could get above the grasses in the field.  I’m happy to report the step ladders were on sale :).  We got them to their spot then it was time to wait.  I drove across the way and walked out to where I thought I needed to be which was 122.6° from North (shooting uphill at 5°), the only problem was I didn’t have any orienteering experience.  I used to play golf for a living, not go out into the back country with nothing but a tent and a compass… so my compass skills weren’t very good.  Plus if you buy a cheap compass from Canadian Tire the day before and open it the day of, you realize it doesn’t work very well. (Turns out it’s not the compass that doesn’t work it’s the operator) Anyway… I got to where I thought I needed to be and set up my camera (and smacked a few mosquitoes).  Then we waited… and waited… and the sun went down… and we realized it was quite hazy and we weren’t sure if we were going to get any moon.

We were communicating by cell phone because we figured yelling 700 yards wouldn’t work… and as we were chatting by speakerphone all of a sudden Andrea yells “THERE IT IS!!!” and starts jumping up and down with excitement as Sherry yells out to me “AND IT’S RED!!!”  On top of the hill they could see it about 10 minutes before I could, so all I could do was wait while they raved at how amazing the moon looked.  Then in an instant I could see it’s color poking above the hill and my heart was racing.  It turns out I was only about 20 feet from the right spot, so I ran over to line up Des & Andrea with the moon and started barking commands over the cell phone of what they should do and where they should move as they stood on those step ladders.  At the same time, our good friend Madeline sat underneath the dressed to fluff it up, and Sherry was picking the veil up and allowing the wind to take hold of it.  It was a mad scramble to get all we could in 2 minutes, then just like that, it was done.

There was this immense feeling of “did that just happen?” that came over me as I looked back through the images in the camera and I was so thankful to my Lord Jesus Christ for giving us some amazing weather just when we needed it.  After trekking back to the car, I went to pick up the 4 of them and we hugged and jumped and celebrated that it actually worked.

So as I say, it was an incredible experience and if you are reading this and want to be part of our next big project, drop us a line and let us know.  These two couples were rewarded with photos that nobody else has.  We’re not sure exactly what we’re going to do next, but it is going to be epic!  It may involve some expense, time and travel, but we have a few ideas to narrow down and then start this all over again.

If you want to see it in print, it will be featured in the September 2013 issue of Rangefinder Magazine.

Below is the original pre-photoshopped version of the moon.  The one up top was the real vision we had for the shoot. 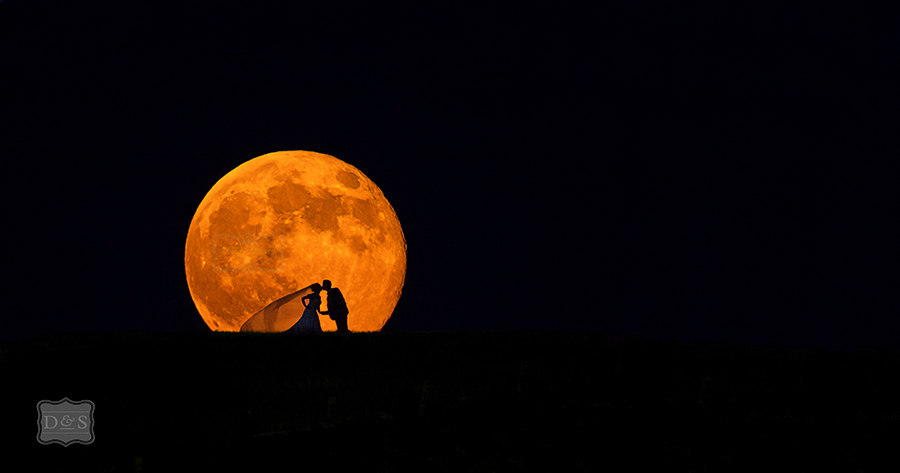 Following are a few photos from the next day.  I told you we had multiple days planned as we didn’t know what the weather was going to do, and Bryan & Eden came up for the evening.  Of course, I have a little story from day two that made it a little bit MORE exciting… As I was standing in the field in the pitch black just before the moon was about to rise, I heard a rustling in the grasses just in front of me.  I couldn’t see what it was, so I made some big noises to see if it would run away.  It didn’t.  It was getting closer, and closer, and closer… then when it was about 4 ft away from me I could make out only one thing: A white triangle nose of a SKUNK!!!  I ran away from the camera’s position and called Sherry on top of the hill…

Needless to say, The next images I shot while in my boxers, and a skunk very near by.

Once we were finished with the shots, I went back to pick up my shorts… and couldn’t find them.  It was so dark, the spot I thought I left them wasn’t actually where I left them.  So after 10 minutes of searching the field, I did finally find them and went on my way.

I’d say they were worth it! 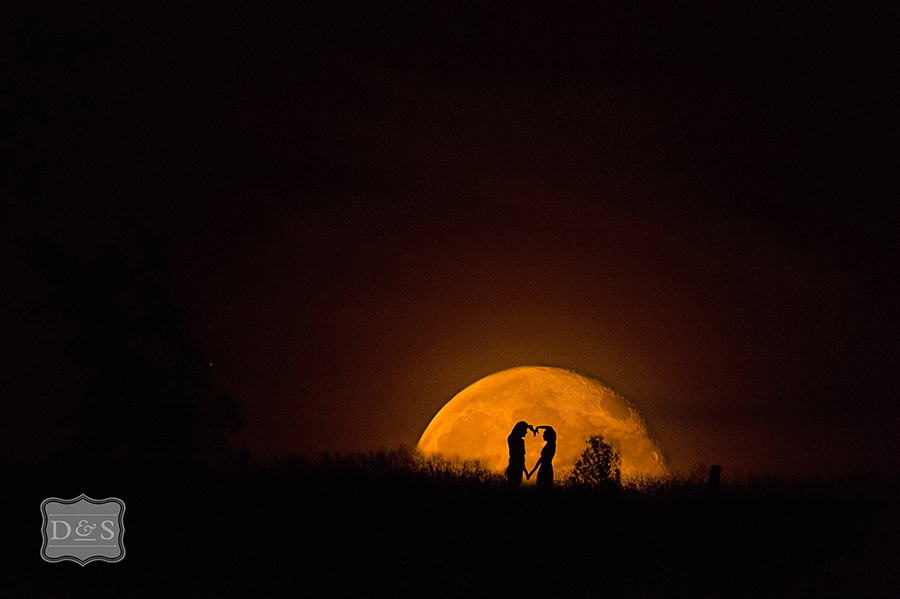 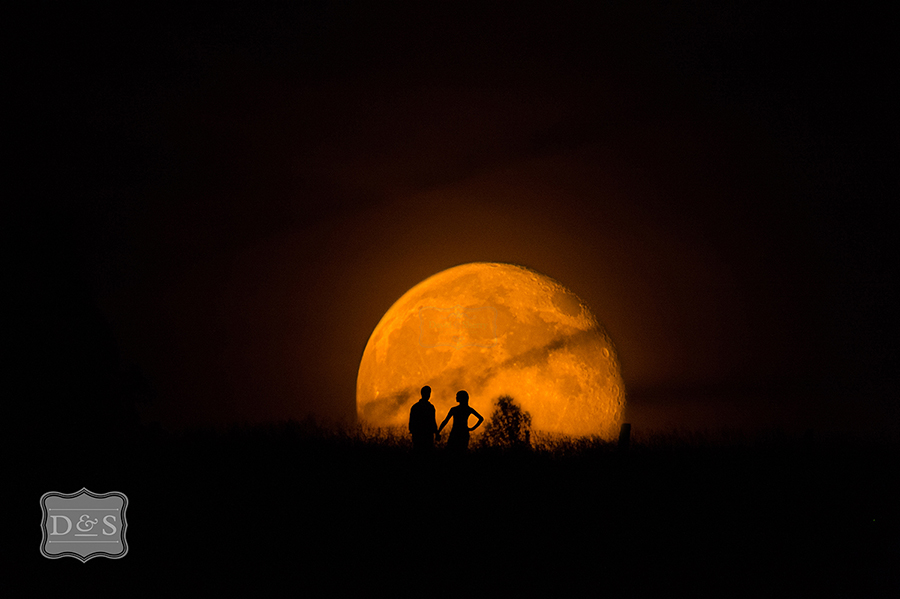 All in all, we are overjoyed at the finished product.  So much so that we have started to entertain other ideas for incredible photos and will be starting to plan the next one very soon.  We are calling these Epic Couplescapes.  If you are interested in being part of our next big idea, please drop us a line.  It may have some cost, it may take some time and you may have to travel… but like these couples, you’d end up with something nobody else has.